How to Maintain Facilitator Neutrality When You Are Anything But! 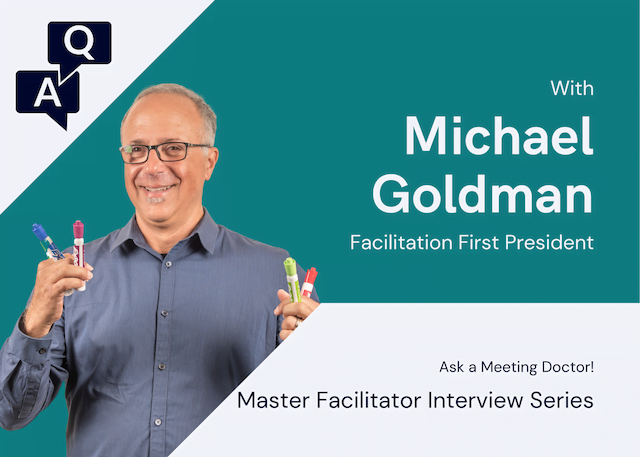 During a recent workshop, a project manager expressed concerns about advocating strict neutrality on the content of meetings while in the role of facilitator. Facilitation First President and Master Facilitator Michael Goldman shares how he responded.

“The reality is ‘a facilitator is NEVER neutral on content, we own that. But we do argue that, except in very rare cases, a facilitator should trust the process and the participants to come up with great results, instead of interjecting their own content and risk breaking neutrality.”

Q 1: Do objections around neutrality often arise when working with staff inside an organization?

Yes! One senior business analyst went as far to say neutrality was the privilege of external meeting facilitators brought in, to design and lead a specific meeting. He added that external facilitators don’t have a vested interest or accountability for the results. However, in the ‘real world’ where the facilitator is also accountable for performance (team leads, project managers, etc.) we can’t afford to always be neutral on content. This analyst was concerned that without the facilitator/manager’s expertise the team won’t come up with the best option.

Q 2: Is there a genuine risk to losing the voice of the facilitator/manager?

Absolutely, especially with smaller teams. There are many ways that managers can get their ideas in without sacrificing neutrality. If a manager must facilitate a group that knows less on the topic than the manager, they can send the necessary info out as a pre-read and/or conduct a short content debrief at the beginning of the meeting. If it’s a small group the manager can join the group brainstorming by using post-its to jot down ideas, mix them up and then post and review the ideas together. For decision-making the manager can be involved by having everyone write their choices on post-its as well.

The decisions can then be synthesized together to get final ranking. In both circumstances, the manager’s thoughts are heard, but anonymity is preserved.

Q 3: How can a manager interject poignant information while facilitating a meeting?

You would never want your team to make a truly bad decision. If open-ended questions haven’t been enough to help the group uncover the missing element, then you need to step into the content of the discussion.

Q 4: How do we step into the content of the discussion – and not ‘facipulate‘?

I tell facilitators that this is exactly the time to back up your verbal message with powerful non-verbal cues. So, on top of stating that you’re stepping out of the role and your reasons for doing so, you want to reinforce this message in several ways. For example:

It’s crucial that you move out of your physical space and stance of authority.

Q 5: How do we know when we’ve crossed the line?

If you ever wonder if you’re balancing your roles effectively, ask yourself:

Is the group coming to its own decision, or are you swaying the outcomes of the meeting?

You’ll know you’re swaying the outcomes when the group turns to you and asks ‘what do you think?‘, or you’re noticing, when looking at the flipchart, many of the ideas up there are yours only. Or, more explicitly, you may hear a participant say “I don’t agree with what you wrote“, or “I thought this was our meeting!“

In conclusion, taking precautions to avoid breaking neutrality ensures the final decisions are those that the group feels are their ideas and, as a result, they will be more willing/likely to follow them through.